You remember that jingle like it was yesterday. Everything had a virtual version around the turn of the century, especially little pocket-sized pets you would care for, feed and trade with your friends. But...the fad of the new millennium wore off, people forgot, toys fell out of fashion. Only collectors seem interested now, grabbing up rare variants on eBay or yard sales. What happened to that feeling? And wouldn't you love to experience it all over again? 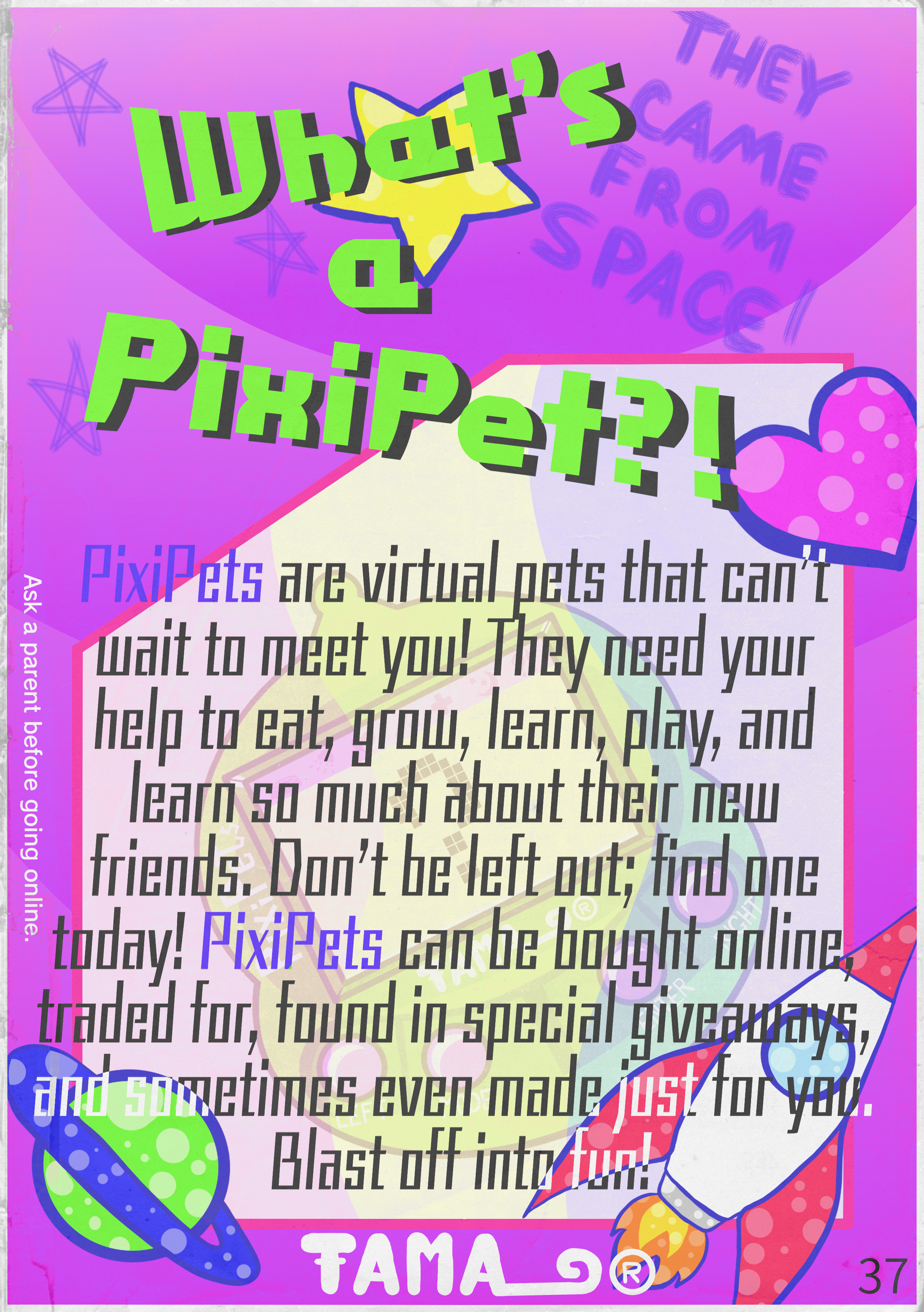 ☆Half the fun is not knowing who you get! Collect and trade 'em - PixiPets!☆

What is a PixiPet, exactly? They came from space! You want to know more? PixiPets have gotten lonely surfing the information highway for years and years, and now they just want a home to call their own! After you purchase special device that your Pixi lives inside, their shape and color will be revealed! Remember: the color of their device is a hint to the color you will get! And sometimes there are rarer PixiPets! 1-2 per case will contain rare features, such as glitter, stickers, flocking, glow in the dark markings and more. Uncommon traits happen, too, like different colored eyes, multicolored hair and more!

Overall, Pixis do share some common traits. They are almost always covered with bright colored fur, with a fluff of styled hair on their heads. They have big, bright eyes, and a bobble on top of their antennae that allows them to show their emotions. It also acts as a WiFi connector so that they are never far from their digital home! Typically a Pixi is around 12 to 16 inches tall, and can run around on two or four legs, depending on their mood. Large ears allow them to hear their friends from far away! They are warm to the touch like a cute little dog or cat, with fluffy fur like a chinchilla.

Pixis tend to choose their own pronouns, but they do not have any gendered identifiers or traits. Personality wise, they are usually upbeat and full of energy, although even the most rambunctious Pixi needs to power down every so often. Usually they will curl up next to any electronic devices they can find, but have been known to nest in electronic cords, or even next to kitchen appliances! But beware: a Glitchi (a virus-infected Pixi) will be much more full of mischief, and you will find your hands full keeping track of their pranks and antics. And be careful! Sometimes they tease and torment regular Pixis!

They can speak the language of their owner as soon as their Device is powered on, so communication will never be a problem! Pixis can also use and understand text, and communicate with sign language if their friends need to. Pixish is their secondary language, full of electronic beeps, squeals, clicks and boops. But no matter how they speak, a Pixi is always talkative, and rarely negative!